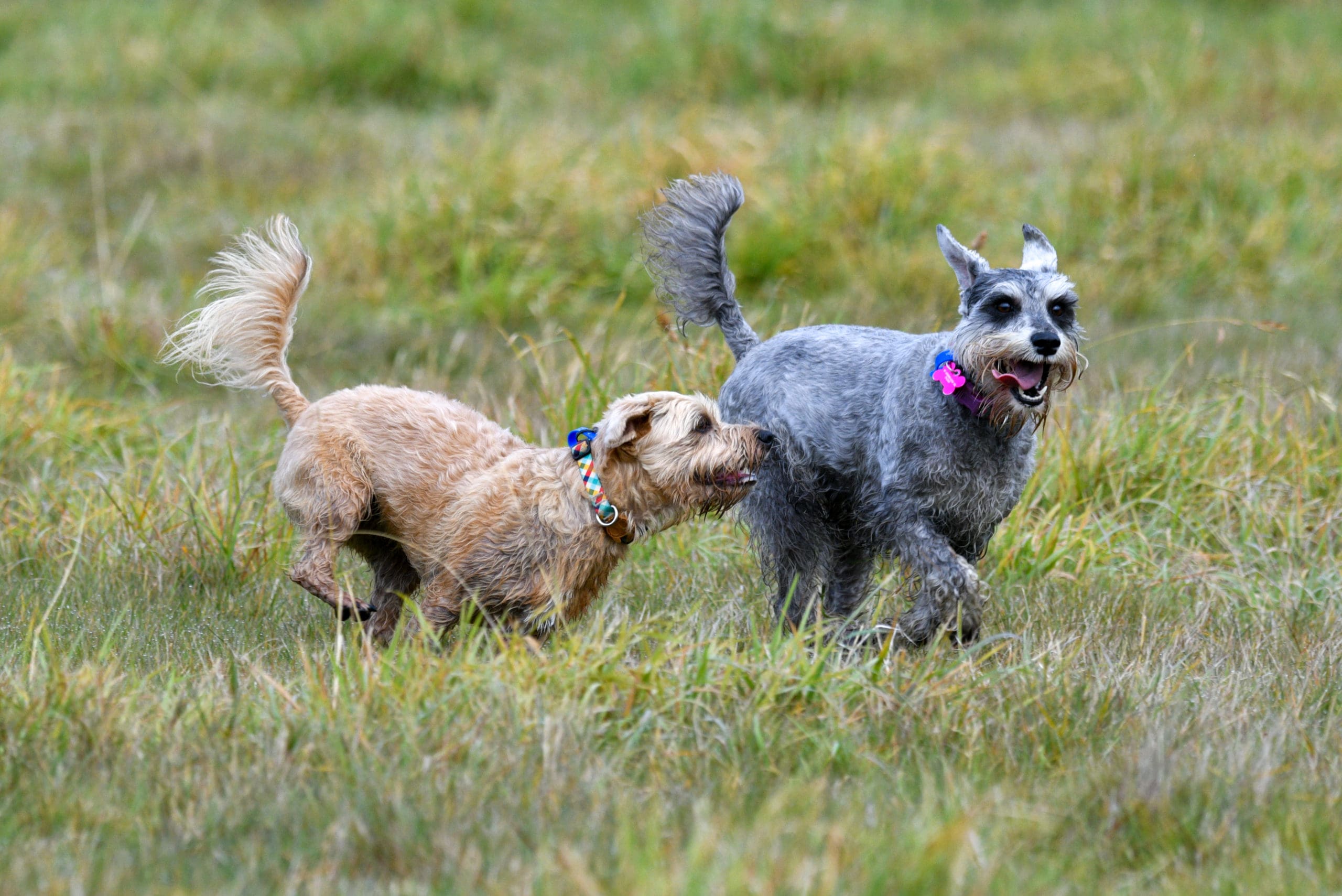 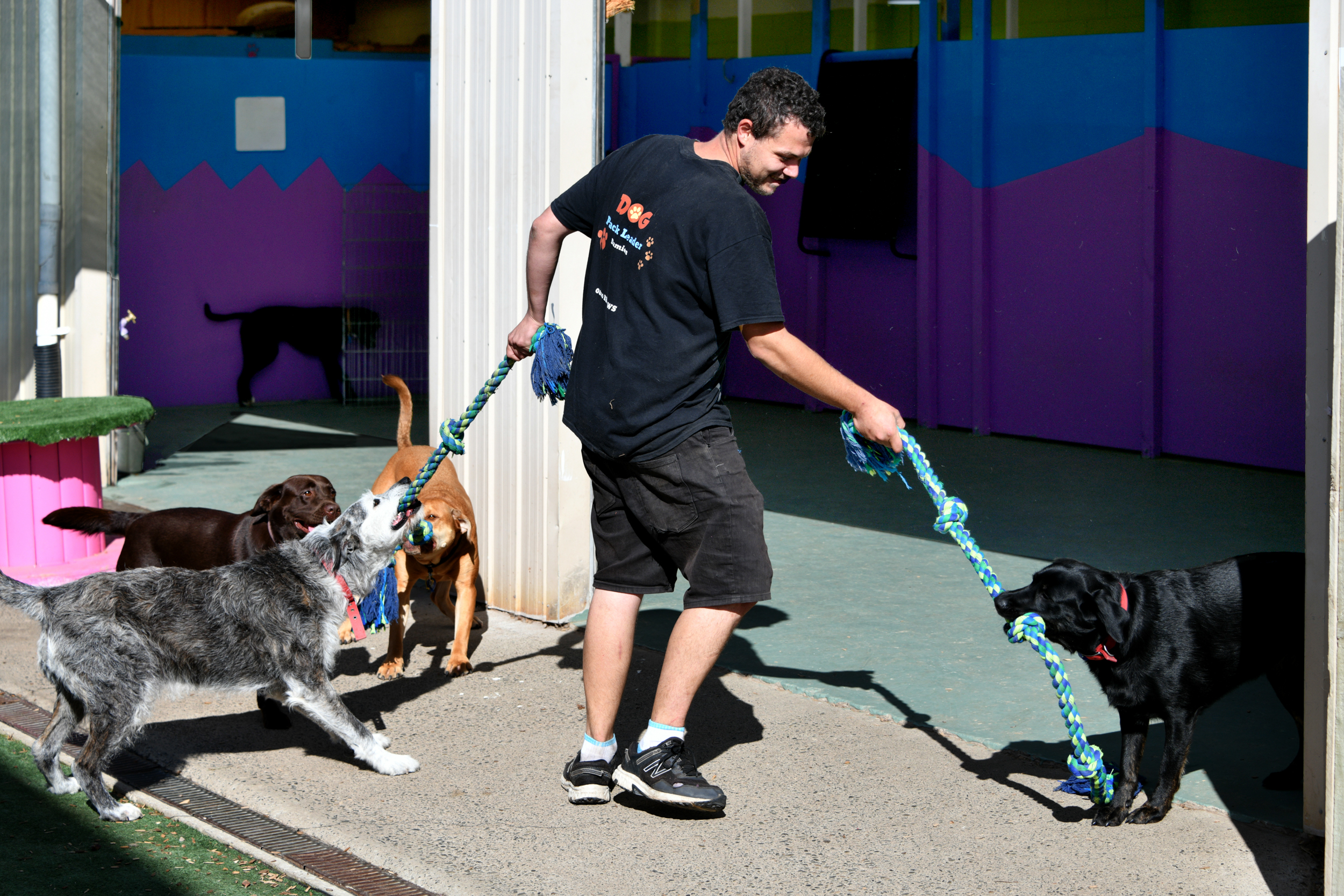 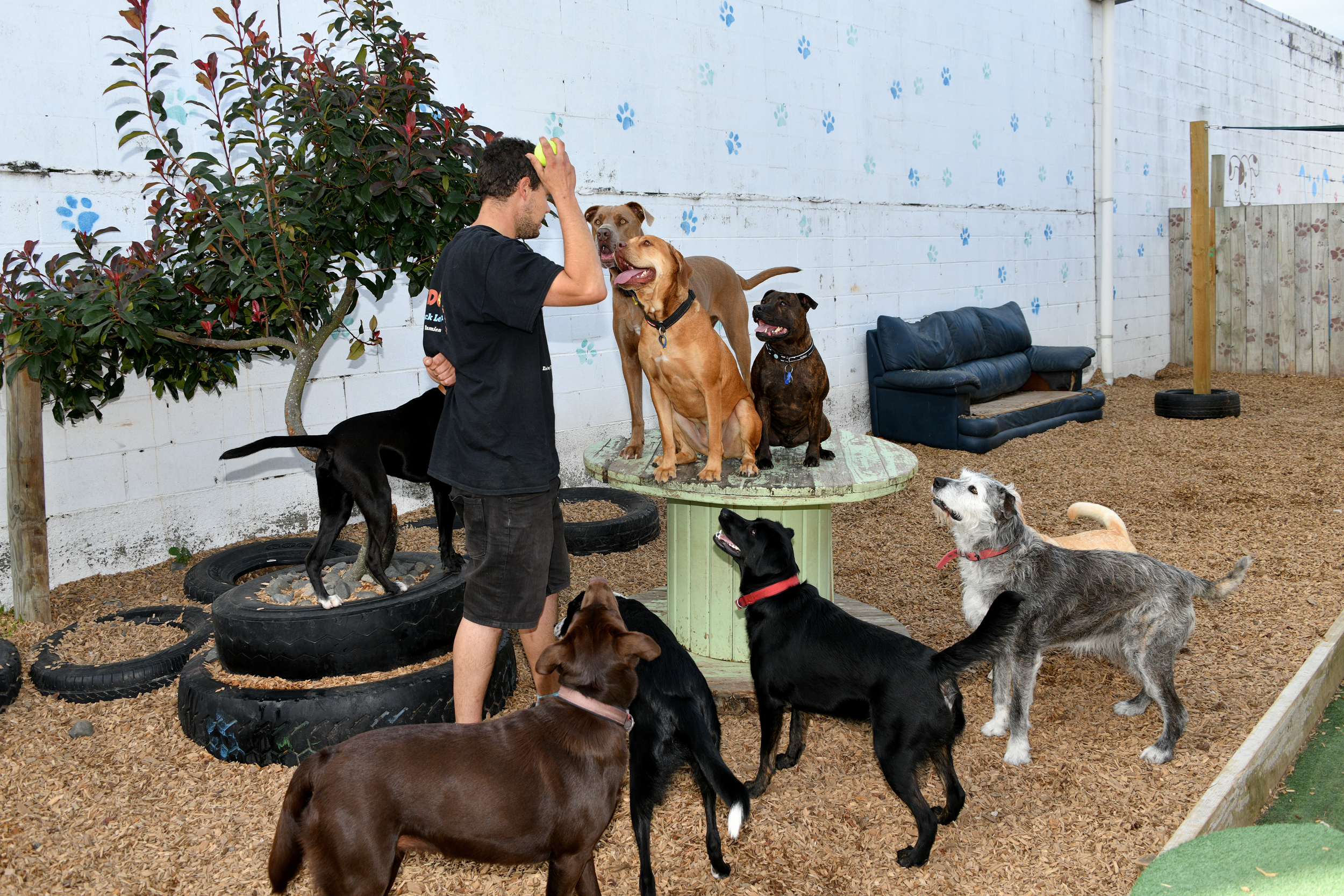 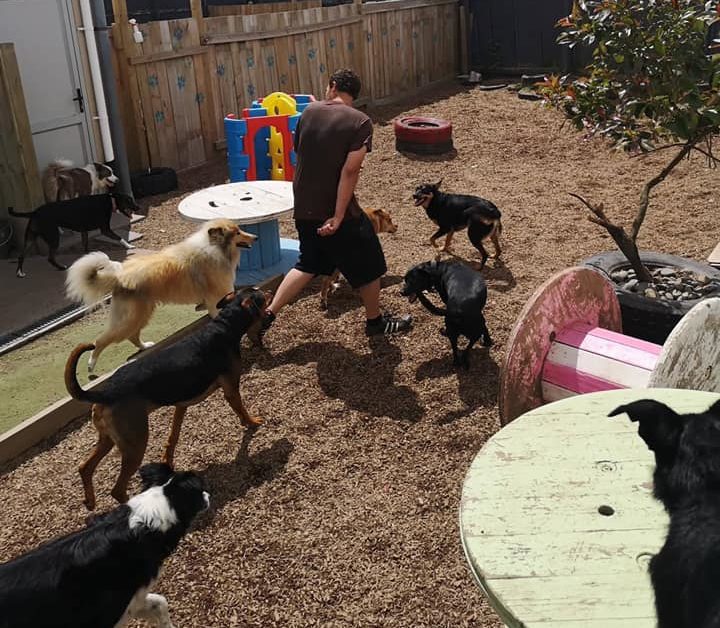 Dogs interact with each other through body postures, facial expressions, tail and ear positions, raising of hair or “hackles,” vocalizations, and scents. Dog socialization is the process of exposing a puppy to members of their own species in order for them to become more interactive. Humans have taken advantage of the socialization period in dogs to expose them to other people, other animals, new environments and experiences. The best age to adopt a puppy is at about 8 weeks of age. Unless there is no other choice, puppies should not be adopted until at least 7½ weeks of age.

The best time to socialize a dog is between the ages of 3 and 12 weeks. Sometimes this dog socialization period can extend to 16 to 20 weeks depending on the breed and the individual tolerance of each dog. Dogs are most receptive to learning how to deal with new situations until about 16 to 20 weeks of age. After this age, dogs do not stop learning from exposure; they just do so at a much slower rate and perhaps in a different way. During the dog socialization period, the exposure to new people, dogs, environments and experiences should be a pleasant, therefore increasing the chances of the dog wanting to interact with other dogs and people in the future. Positive exposures when young help decrease a dog’s fear of new places and experiences when he is older. A dog’s temperament develops due the interplay between his genes and the amount of exposure he receives when he was a puppy.

Sexual maturity in domestic dogs occurs between 6 to 9 months of age (later for giant breeds), while social maturity develops at 12 to 36 months of age. In free-ranging groups, dogs that challenge the established social hierarchy may leave and form their own groups if they do not succeed in gaining a high rank. This situation may be similar to one form of inter-dog aggression that occurs in multiple-dog households. Social maturity is also the time when problems with aggression and anxiety develop. Roaming, mounting, urine marking, and fighting are stimulated by sex hormones, particularly testosterone. These problems are often greatly reduced in males by neutering.

We humans get into a lot of trouble with dog-dog relationships in our society. We expect our adult dogs to act like puppies forever, and we expect every dog to love every other dog. We judge and label dogs who display entirely normal, species-appropriate behaviours as “bad dogs” because they dared to growl or show teeth, and think that dogs who jump all over other dogs wildly are displaying entirely sweet or kind behaviours.

The truth is that dog tolerance levels are variable, and will change with both age and experiences (good or bad). There is also a genetic component to most dogs’ sociability with others of their own species, so all of the appropriate socialization in the world will not necessarily make every dog socially adept and friendly.

Dog Social: most puppies start here. They generally enjoy and seek out other dogs, and tolerate (or sometimes even encourage) rude behaviours from other dogs like humping or barking in their face. As dogs mature, almost all of them will move to the right of this trait. Truly Dog Social adult dogs (those who really appreciate the company of almost every other dog) are quite rare. Unfortunately for the species, this is the trait we expect all dogs to exhibit, even though it’s a fairly abnormal occurrence in the vast majority of mature dogs.

Dog sociability is not a fixed trait. As a dog matures, he or she will often quite naturally become less social and tolerant. There are many developmental changes that happen between sexual and social maturity, and most dogs will continue to display these changes until two to three years of age. Proper facilitation of dog-dog introductions and friendships can change your dog’s sociability for the better over time, and bad experiences can quickly make things worse. Good leadership and direction is important to set your dog up for success with their species.

Dog Tolerant: slightly to the right of Dog Social dogs are those who are Dog Tolerant. Many puppies who will grow up to become Dog Selective or Dog Aggressive start here, before sliding to the right as they mature. This is also an incredibly common place for adult dogs to end up after maturity. Dog Tolerant dogs get along with most other dogs. They may be playful or neutral, but they generally have a pretty long fuse and good communication skills. Dog Tolerant dogs also tend to do well on leash around other dogs. They require normal supervision and limited direction from their human guardians.

Dog Selective: just as common as the Dog Tolerant adult is the Dog Selective one. While a rare and concerning trait in well-socialized puppies who have not had bad dog-dog experiences, this is a very normal place for an adult dog to end up at maturity. Dog selective dogs will often have a circle of “approved” dogs or types of dog that they do well with. Scuffles may break out quickly, and these dogs often have very short fuses. They may dislike certain play styles or types of dog on sight, and may be less satisfactory on leash with other dogs. These dogs often dictate the rules while playing and may seem like the “fun police” or the “instigator” in group situations. They require a lot of supervision and positive direction from their owners to succeed with others of their species.

Dog Aggressive: this trait is highly abnormal in puppies, and fairly uncommon in adult dogs. In fact, it’s about as uncommon as truly Dog Social adult dogs. Dog Aggressive dogs often have a very limited circle of dog friends (perhaps only one or two housemate dogs), or may have no dog friends at all. They have quite poor social skills and can be quick to spark up on leash. Dog Aggressive dogs need additional support, patience, and direction from their guardians to succeed in dog-dog interactions.

Story of Dog A: Eighteen-month-old male, Lab terrier cross, he’s matured into a very normal and manageable Dog Selective boy. He can be rude and pushy with other dogs, and is frequently inappropriate about intrusively sniffing or licking new dogs’ genitals if not redirected. He is also highly aroused by both meeting and playing with other dogs. He most enjoys interacting with opposite-sex, but has dog friends of both genders and of various sizes. He does well with other dogs on leash when he is in “working mode” and generally handles on-leash greetings appropriately. Dog A currently takes corrections from other dogs well if he gets into their personal space, but I suspect that he will become less willing to yield space as he continues to mature.

As Dog A handler, I failed to set him up for success when I allowed him to continue an aroused interaction/play with a male puppy who was larger than him. When the puppy jumped on and mouthed him too hard, he responded appropriately by correcting this behaviour… then continued to go after the puppy [quite inappropriately!] until he was physically removed. Once in timeout, he immediately calmed down.

While this incident was over within seconds, it’s the sort of thing that, when allowed to happen repeatedly, will continue to shift Dog A further towards the Dog Aggressive end of the spectrum. In fact, many people dogs initially enjoyed playgroups, the dog park, or doggy day-care, then became pickier and more likely to scuffle as adolescents, only to end up with a more serious incident as a young adult.

Regardless of where your dog falls on the sociability spectrum, it’s your responsibility as their guardian to set them up for success. Remember that these traits are flexible, and that thoughtful management and slow introductions can shift your dog further to the left of the spectrum. Just as I have zero interest in partying, my adult dog is less than enthusiastic about the idea of a free-for-all play environment… and that’s entirely normal and okay.

Where does your dog fall on the sociability spectrum?

Is It Okay If Your Dog Doesn’t Interact With Other Dogs? This all depends on how your dog responds to the presence of other dogs. If you can tell based on your dog’s body language that he appears uncomfortable around other dogs, you should intervene and call him away.

Placing your dog in situations in which he is forced to be around other dogs can cause him to be more stressed and anxious. Imagine how you feel when you are forced to make small talk with total strangers that you have nothing in common with.

As long as you provide your dog with both mental and physical exercise and provide plenty of social interactions with you and other people or animals that he cares about, it can lead a very fulfilling and happy life.

Can You Make Your Dog More Social? If you have an adult dog that you want to make more social, you need to be sure that this is what your dog wants to do. If your dog appears to be interested in the other dog but then appears uncomfortable after the initial greeting, call him away.

Make a point to carry dog treats so that you can reward him for greeting another dog, helping him to form positive associations with the presence of other dogs. Setting your dog up for some social visits with other calm, well-mannered dogs can be helpful to build up his social skills and learn to become more comfortable around other dogs.

Be prepared to face the fact that not all dogs want to interact with other dogs or know how to appropriately interact with them. One of the possible recommendations may be to simply avoid other dogs.

Dogs are like people. Some people are very social, as are some dogs. Some people prefer to be alone or have a limited number of friends they prefer to interact with. Some dogs have similar philosophies. Always allow your dog to have a choice. If he prefers to avoid interacting with other dogs, then respect his wishes.

Before you purchase your collar, you need to take some accurate measurements to ensure that it’s

During the month of May, the team at BBPAWS are ta

It’s our 8th year Anniversary! For the love of m

✨DOG OF THE WEEK!✨ This week we have Fergus!